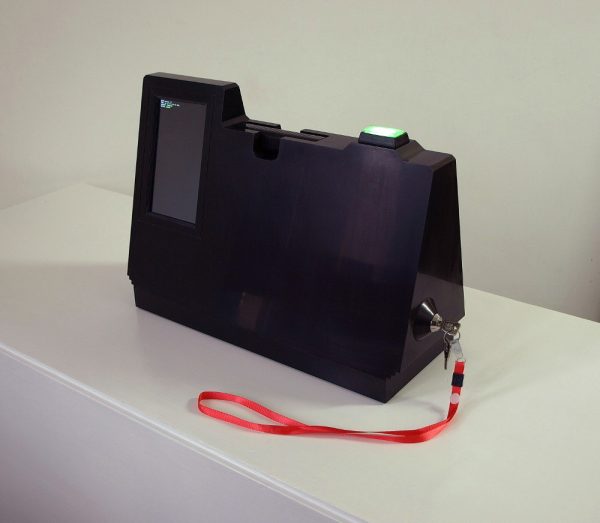 BSTPG is the B. S. Teapot Generator. It is a non-interactive computer sculpture system and conceptual artwork created with an interest in exploring how digital manufacturing techniques and computer programming can be employed in relation to sculptural practice. The BSTPG project seeks to probe the logical limits of that relationship, along with issues raised in relation to authorship, ownership and commerce in the art market.

BSTPG generates highly randomized and unique sculptures which are also functional teapots1 and produces them via 3D printing in an (almost) completely automated process.

An initial launch event was held at the arebyte Gallery (London) on the 12th of December 2018 where the BSTPG system was run for the first time and the first teapot was generated (the results can be seen here). Some improvements and additional features are currently being implemented and a second, enhanced launch event is expected to be scheduled in 2019.

The BSTPG software aims to make a teapot because that’s what it is programmed to do. A looping generative process of this sort requires defined termination conditions, otherwise it would carry on running forever2.

For the purpose of the BSTPG algorithm, a valid teapot is defined by certain measurable conditions alone. It must have a capacity of at least 1.4 litres3, it must have a handle which joins onto the body, a lid which can be removed, and a spout which can be poured from. The form also needs to meet real-world criteria such as to be stable on a flat surface and to fit within the maximum dimensions of the 3D printing machine to be used in production.

The choice of the teapot is a fairly arbitrary one, but the intention is that in choosing a familiar object of human domesticity the inhuman qualities of the computer’s algorithmic decision-making will be emphasised.

The teapot also has a history in computing, in the shape of the famous Utah Teapot created by pioneering computer graphics researcher Martin Newell in 1975. The teapot was an ideal test shape for computer graphics because it is a relatively simple shape which combines many different types of surface topology4. To this day, some 3D software still includes the Utah Teapot as a geometric primitive, along with cuboid, spheroid, cylinder etc. The original physical archetype for the Utah Teapot, which belonged to Martin Newell and his wife is now on display to the public at the Computer History Museum in Mountain View, California

While the BSTPG software reliably conforms to the formal teapot conditions outline above, it is an unthinking process, which can have no consideration whatsoever for human comfort, ergonomics, or aesthetics5.

SLS Selective Laser Sintering is used for production because it allows for the least amount of human intervention. In the SLS process, successive very thin layers of powder are laid down and then parts of the layer are fused by a laser. The great advantage of this method is that the compacted, non-fused powder which surrounds the form provides support during construction, meaning that unlike with most 3D printing processes there is no need to build extra support structures for overhanging parts, and therefore there is no need for a human to cut these of and hand-finish the form.

There are still some parts of the 3D printing process which may not be entirely automated, but this should not have any affect on the output. I am thinking, for example, of taking the piece out of the machine after laser sintering and cleaning away the excess powder, packing it in a box for postage, etc.

The BSTPG software runs on a dedicated hardware console with only one button.

As a practical necessity, there is also a key-switch which must be activated by a person in authority before the button becomes active. This is required at this time because each time the program runs there is a significant financial impact6. The user must agree to pay in advance of pressing the button, and absolutely no refunds, exchanges or guarantees are offered, except in the very unlikely event that the machine fails to produce any viable output at all.

Therefore, BSTPG also represents a commercial proposition and a leap of faith every time because the user has no idea what the form will be like. Also, the generation process runs blind, so that there is no visual participation in the generative process of making the sculpture. The result is not viewed by anyone until delivery of the physical object, which has already been paid for and the unique form filed in the BSTPG archive.

When the button is pressed the generative process is triggered and runs to it’s conclusion (usually taking less than an hour) and the resulting 3D computer model is sent for production.

Physical production is outsourced to a high-end professional 3D printing facility – the teapot data is transferred automatically by the BSTPG software and delivery should take take place within a few days.

The BSTPG console is designed as an integral part of the experience.

There is only one button, because the machine does only one thing.

That button is illuminated in either red or green by an internal extra-bright LED – communicating instantly and non-verbally the state of authorisation.

There is a small screen, which displays some additional information about the status of the console and text-based output during the generation process. There is the key-switch also, which is neccessary for authorisation and also adds some gravitas to the cermony of usage. The screen and the key switch are designed to harmonise perfectly with the whole form without taking focus away from the one button.

It’s form is designed to conjure faith in the technology inside it and inspire it’s own usage. It is a somewhat mystic talisman touched by the high-tech aesthetic of the consumer electronics products of yesteryear and therefore perfectly in tune with the current fashion for technology nostalgia7.

The console casing is meticulously hand-crafted from ABS plastic, with custom electronics inside. It both contrasts and harmonises with the actual output objects which it produces, but in technique of fabrication it is diametrically opposed.

Visit the gallery at a quiet time and make the necessary financial arrangements with staff.

Press the button with an attitude of calm reflection, preferably alone.

As the console works, meditate for a short while on the intangible, then leave without ceremony. 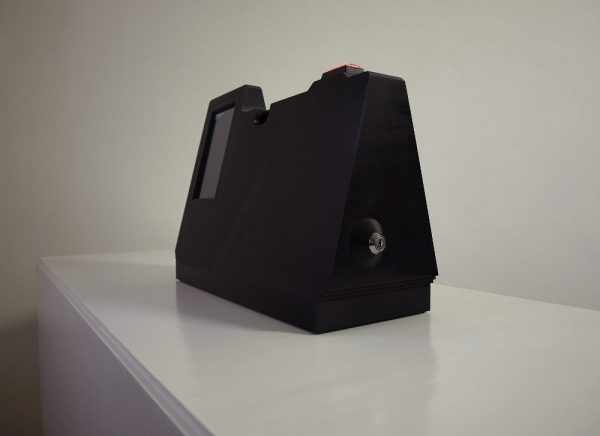 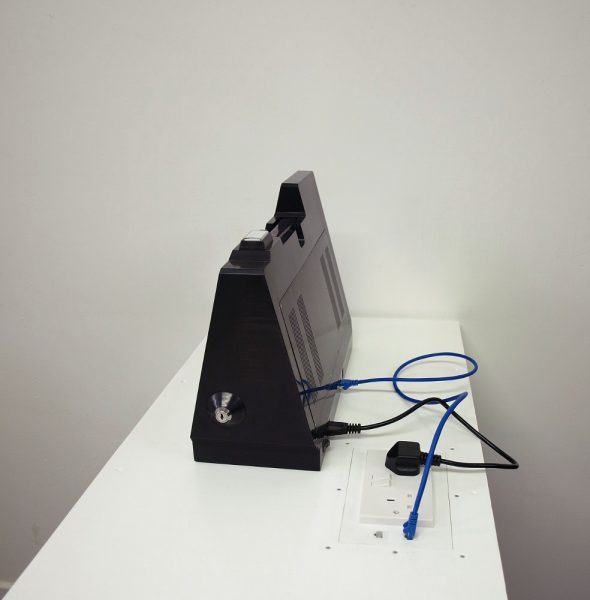 I also present BSCSG – the B.S. Cup and Saucer Generator. 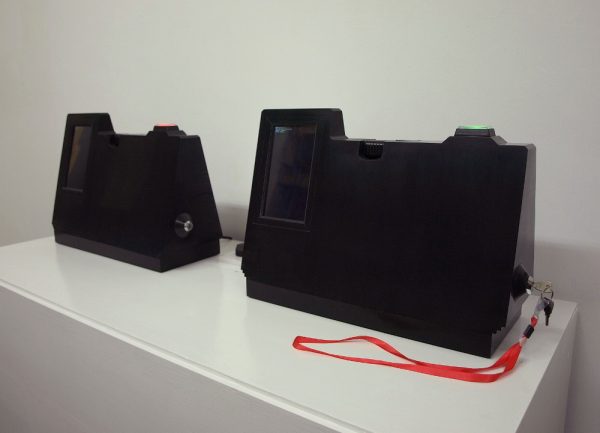 Chance-based or generative art is no new thing, but technological advances now allow for fully automated generation and production of complex forms.

Storage of data in digital form allows us to make flawless copies of forms but computer programming allows us automate the production of unique forms.

Each BSTPG output object is a unique form. The chances of two identical forms coming out of the process are infinitesimal, but the all forms are checked against the database of past forms all the same, and will be rejected if not unique.

Each output object is licensed in perpetuity to the buyer, and registered at central database of BSTPG Authority.

If the original instantiation is destroyed (either accidentally or intentionally), the owner may create a new instantiation. Material and scale are not important – so long as the owner does not make claims of authenticity for multiple copies. Any special emotional attachment to a particular BSTPG object instantiation is a personal matter for the person involved.

BSTPG Authority will not police the existence of inauthentic copies – we do this would be a pointless and thankless task.